For the second successive season the Final was a Hibernian-Celtic affair. This time though it was a much poorer game as Hibernian retained the trophy in front of 49,204 thanks to the only goal of the game from Alan Gordon in extra time.

MESSAGE FROM THE CHAIRMAN OF DRY8R0UGH & CO. LTD.
ROSS GIBBONS
In a year of celebration of a hundred years of Scottish football a tournament in only its third year seems very young indeed
Therefore it is a source of great pleasure to myself and everyone ml Drybroughs that in this very short tune the Dtybrough Cup should so convincingly have established itself as a thrilling curtain raiser to the season to come—* season which we all hope will see Scotland Qualify for the World Cup and go on to great things in Munich.
That It has become a firm favorite so quickly is entirely due to the skill and competitive spirit of the great learns who have participated in the two tournaments so tar and the line up this year promises that 1973 will be equally exerting, with another great Hampden Final afternoon.
This tournament is only one of the activities of Scottish football wit/i which we have been associated in the past three years, and elsewhere in this programme you will find reference to the other tournaments we sponsor—the Drybrough Junior Trophy and the Drybrough Brewery Highland Cup both of which this year again provided exciting matches throughout the country and contribute also to the well-being of the game in Scotland.
Today however it’s the big clubs’ day. I hope there will be plenty ol goals and may the best team win \
Message from Mr. W. Lindsay

As It* newly elected President of the Scottish Football League I would like to take this opportunity to send greetings to all football fans and to pledge my Presidency to devoting myself 10 seek all possible ways ol providing what the pundits call “brighter football’. I do so in the belief that the game has perhaps become too technical and the sport overshadowed by a desire to win at all costs, irrespective sometimes of the desires of the spectator.
I believe our sponsors today agree with me hence the qualification in this Competition being the number of goals scored in the previous season. Surely (he object of the game must be 10 score goals, and to do so deserve* reward
Sponsorship however can be a double-edged sword and the League have indeed been fortunate in finding sponsors who allow it 10 organise the competition without interference This leads to the perfect relationship between sponsors and the sponsored. We the legislators in football am being given an opportunity to provide “brighter football” with freedom from financial worry. We mutt not (ail. and the dubs Involved today carry a pleasant burden iu ensure that we do not. I feel confident that today’s final will not. indeed must not. let football down, and will convey the thanks of all of us to Drybroughs by making this a final to be remembered with the accent on attacking football and impeccable sportsmanship on the held-
I appeal also to fans to play their part and 10 accept victory or defeat for their favorites in a true spirit ol sportsmanship, and I wish them everywhere a truly enjoyable season to come

ALISTAIR HUNTER (Goalkeeper)
A £36,000 signing from Kilmarnock last season. Humor has gone a long way towards solving a problem which has dogged Celtic since the retire! of Ron Simpson Called into the international squad lot the Home Setes. he had a stand-out game at Wembley.
DANNY McGRAIN (Full-back) Truly emerged last season n« a Parkhead regular and was rewarded at International level. Fast on the bruuk o fid in recovery.
DAVIE HAY (Full-back/midfield) Fast ‘ • ■ immg a Celtic and Scotland legend due to his adaptability and like Hunter wis a Great SCOT at Wembley in May. A tremendous steadying influence on his defence.
PAT McCLUSKEY (Midflolrl) Yr-t another Celtic ‘Gabe’ who has successfully made the transition to first team football. Pat could establish himself as a first team regular thrj season.
STEVE MURRAY (Midfiald) A great deal of focus will be on (his £50,000 buy from Aberdeen but it beams certain his busy style will hlnnd into the side and lift performances even further Once with Dundee, the Dumbarton boy looks ready to have one of his best ever seasons
GEORGE CONNELLY (Centre back) The quiet man of Parkhead who has found himself the centre- of controversy of late. Unfortunately rulod out of recent internationals, this splendid defenceman Is sure to emerge aft the keystone of the changing Celtic formation.
BILLY McNEILL (Centre back)
Now entering his 16th year with tho club Billy appears to be as durable as ever and ready to lead the side to a handful of new triumphs. “Billy can’t go on for ever”, if has been said. Recent form soys otherwise I
JIM BROGAN (Full back, mid-field) A tower of strength in defence Jim has earned international recognition through his no-nonsense approach.
KENNY DALGLISH (Forward)
With the way-going of Lou Macari, Kenny has taken over the high scoring act and this has led to international recognition. Is capable of snapping most chances in front of goal and looks an odds-on bet tor a high tally again this term.
BOBBY LENNOX (Forward)
Joined the club 12 years ago and n has been hinted he is a veteran. But twn goals in a pre-season game in lieland proved he is just as effective as ever and this suggests he will he as valuable as ever m the coming league and cup campa-gns.
HARRY HOOD (Forward) Like others in the Parkhead pool. Harry is called upon on specific occasions and hit clevor ball-work and shooting seems to pay of at just the right time. A player of quality who can slot into innumerable permutations.
TOM CALLAGHAN (Midfield) The long striding Fifer is usually given the risk of attacking tight defences with powerful runs and the openings are created by his hard work. Has proved to be n terrific purchase from Dunfermline
ANDY LYNCH (Winger) A
E3S.000 buy from Hearts last season. Andy impressed in the Pre-season games in Ireland. Fast strong and dlroct. he should prove a groat asset to the Celtic pool.
BRIAN McLAUGHLIN (Winger)
Having been carefully nursed over the past twn seasons, the vast potential of this eighteen year old now seems certain of being realised this term

[Show as slideshow]
[View with PicLens] 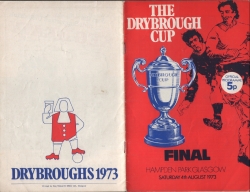 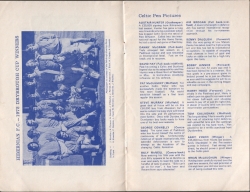 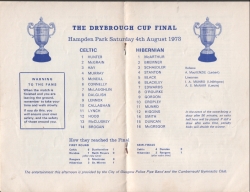 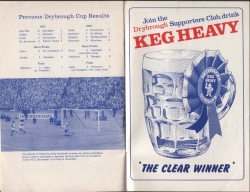