A CONTROVERSIAL. match, screened live across Britain, saw Hibs pass up several early chances before allowing Aberdeen to carry the three points back to Pittodrie. The game swung around the dismissal of Pat Mcginlay on the hour mark (red-carded for an alleged clash with Aberdeen’s Stephen Glass) and a delay confirming that a Billy Dodds header had crossed the line for Aberdeen’s second on 32 minutes. Down to ten men. Hibs were never quite able to claw their way hack into the game, despite a Frantic last couple of minutes sparked off by another fine goal from Kevin Harper.

[Show as slideshow]
[View with PicLens] 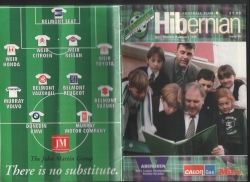